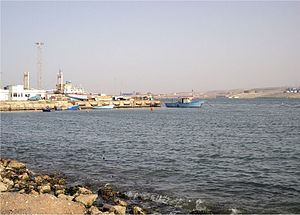 History:
An ancient Greek agricultural colony, Αντίπυργος (Antipyrgus) was once on the site of modern Tobruk,[4] and the ancient name is still occasionally in use. The name roughly meant "across from Pyrgos", referring to a location in Crete across the Mediterranean Sea from Antipyrgos. In the Roman era, the town became a Roman fortress guarding the Cyrenaican frontier. With the spread of Christianity, Antipyrgus became an episcopal see. Only one of its ancient bishops is known by name: Aemilianus, who took part in the Second Council of Constantinople in 553.[7] No longer a residential bishopric, Antipyrgus is today listed by the Catholic Church as a titular see.[8] Later the site became a way station on the caravan route that ran along the coast.
Culture:
Tobruk remained in Axis hands until 11 November 1942, when the Allies captured it after the Second Battle of El Alamein. It remained in Allied hands thereafter. Although not as much a reason for its strategic significance, the British built a rail line from El Alamein to Tobruk during the course of the war. This rail line was significant both for purposes of supply and as a sense of pride to the Allied troops, as the rail line was built through a little-populated, inhospitable desert.
Economy:
At the beginning of World War II, Libya was an Italian colony and Tobruk became the site of important battles between the Allies and Axis powers. Tobruk was strategically important to the conquest of Eastern Libya, then the province of Cyrenaica, for several reasons.
Hot Spots:
Tobruk has a strong, naturally protected deep harbour. It is probably the best natural port in northern Africa,[citation needed] although due to the lack of important nearby land sites it is certainly not the most popular. The city is effectively surrounded by a desert lightly populated with nomadic herdsmen who travel from oasis to oasis. There are many escarpments (cliffs) to the south of Tobruk (and indeed in all of Cyrenaica, the eastern half of Libya). These escarpments generally have their high sides to the south and their low sides (dip slopes) to the north. This constitutes a substantial physical barrier between the north and south of Libya in the Tobruk area.
Politics:
Tobruk had a deep, natural, and protected harbour, which meant that even if the port were bombed, ships would still be able to anchor there and be safe from squalls, so the port could never be rendered wholly useless regardless of military bombardment. This was of critical importance, as it made Tobruk an excellent place to supply a desert warfare campaign. It was also heavily fortified by the Italians prior to their invasion of Egypt in November 1940. In addition to these prepared fortifications, there were a number of escarpments and cliffs to the south of Tobruk, providing substantial physical barriers to any advance on the port over land. Tobruk was also on a peninsula, allowing it to be defended by a minimal number of troops, which the Allies used to their advantage when the port was under siege. An attacker could not simply bypass the defenders, for if they did, the besieged would sally forth and cut off the nearby supply lines of the attacker, spoiling their advance.
Population:
120000
Economic Activities:
Tourism
Industry
Agriculture
Top of   page